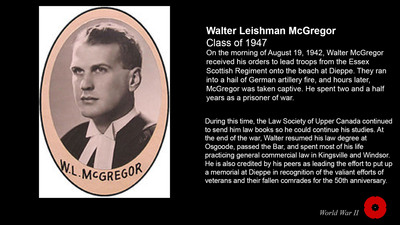 Walter Leishman McGregor, Class of 1947. On the morning of August 19, 1942, Walter McGregor received his orders to lead troops from the Essex Scottish Regiment onto the beach at Dieppe. They ran into hail of German artillery fire, and hours later, McGregor was taken captive. He spent two and a half years as a prisoner of war. During this time, the Law Society of Upper Canada continued to send him law books so he could continue his studies. At the end of the war, Walter resumed his law degree at Osgoode, passed the Bar, and spent most of his life practicing general commercial law in Kingsville and Windsor. He is also credited by his peers as leading the effort to put up a memorial at Dieppe in recognition of the valiant efforts of veterans and their fallen comrades for the 50th anniversary.