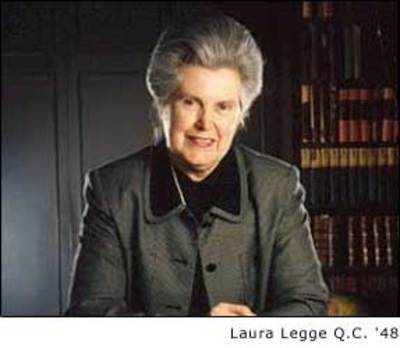 Laura Legge was the first woman to be elected as a bencher of the Law Society of Upper Canada and went on to become its first female Treasurer. A strong advocate for the traditional rights and duties of the legal profession, Legge led several legal and community services. She was also a role model and mentor to many young female lawyers. During her lifetime, Legge received several awards, including an Honorary Doctor of Laws from the Law Society and the Alumni Award of Excellence from Osgoode Hall Law School in 1997. In 2007, the Law Society created the Laura Legge Award to honour her many contributions to the profession. It is awarded to women who exemplify leadership in the profession.