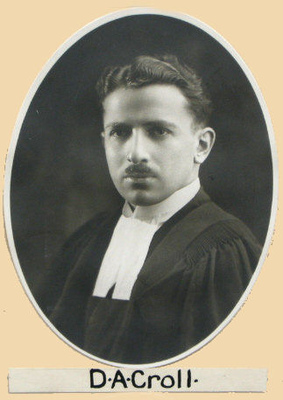 David Croll was born in Moscow and immigrated with his family to Canada when he was a young boy. An early advocate of welfare and other types of social assistance, Croll first worked as a lawyer then moved into politics. He served as the mayor of Windsor from 1931 to 1934 during the height of the Great Depression. Croll insisted the city go into deficit in order to provide relief programs for the unemployed and destitute. He became Canada’s first Jewish cabinet minister when he was appointed the Minister of Public Welfare under Mitchell Hepburn’s Liberal government. While serving as Minister of Labour, Croll resigned from Hepburn’s Cabinet, after the Premier sided with General Motors during the 1937 United Auto Workers Strike in Oshawa. He wrote: “I would rather walk with the workers than ride with General Motors.” After another term as mayor of Windsor, and service with the Canadian Army during WWII, he was elected as an MP for Toronto-Spadina riding. Croll became Canada’s first Jewish senator in 1955. He was the author of an influential report on poverty, which moved the Trudeau government to triple family allowances and institute the Child Tax Credit in 1978. Croll was also responsible for several Senate reports on aging. In 1990, he was sworn into the Queen's Privy Council, an honour usually given only to federal cabinet ministers.