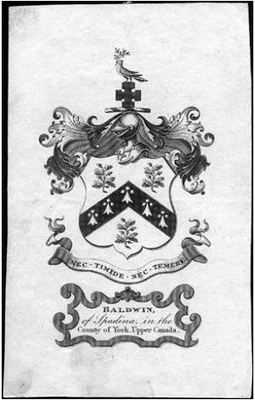 According to Harrod & Ayearst, this bookplate refers to the father of Robert Baldwin. He arrived in Upper Canada from Ireland in 1799, settling first in Durham County, where he was appointed a lieutenant-colonel in the Durham militia and a justice of the peace before the family resettled in York (not Toronto). He was called to the Bar in 1803 and appointed a district court judge in 1809. He became a bencher of the Law Society of Upper Canada in 1807 and served several terms as Treasurer. He was elected MP for Norfolk in 1838. His home in York (Toronto) was called Spadina House from the Indian word spadina, which means a sudden rise of ground such as that upon which the house was built. [Motto: Nec timide nec temere, or Neither rashly nor timidly].