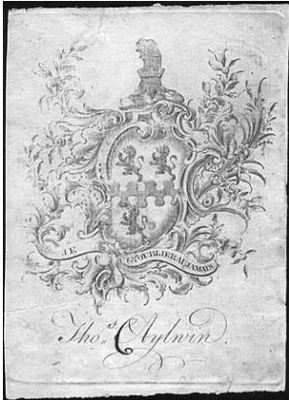 Thomas Cushing Aylwin was born in Quebec City. He was called to the bar in 1827 and spent most of the next twenty years in politics achieving the post of solicitor-general for Lower Canada in the Lafontaine- Baldwin governments in 1842 and 1848. He was appointed a puisne judge in the Court of Queen’s Bench in 1848 and remained with this post until 1868 when he retired due to his failing health. (Wallace)At the time of his death he owned about 50 books in his library. This is the same bookplate used by his grandfather, Thomas Aylwin, 1729-91, and as the strike appears equal in strength it is not a later strike, but rather one of the leftovers from his grandfather. It is therefore an eighteenth century plate for a nineteenth century collector. Gagnon has erroneously transcribed the motto on the bookplate as JE N'OUBLIERAI PAS in lieu of the actual one, JE N’OUBLIERAI JAMAIS (I won’t forget, as opposed to I’ll never forget). H. & A. have repeated the mistake. He has merely added a manuscript C between THOS. & AYLWIN.