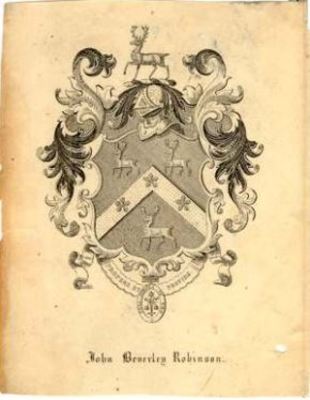 John Beverley Robinson was born in Lower Canada, son of a Virginia loyalist. The family moved to Kingston, Upper Canada, in 1792. In 1799 he was enrolled in the school in York recently opened by John Strachan, and he lived in the the Strachan household until 1807. At age 16, he left to enter the study of law D’Arcy Boulton. Robinson served in the War of 1812 as a militia officer under Sir Isaac Brock, and was appointed acting Attorney General of the province. From 1818-1829, Robinson was the Attorney General of Upper Canada, and, in 1829, he was appointed Chief Justice, Speaker of the Legislative Council, and President of the Executive Council of Upper Canada. As a judge he has had few equals in the history of Canadian judicature. [Motto: Propere et provide, or Quickly and cautiously]