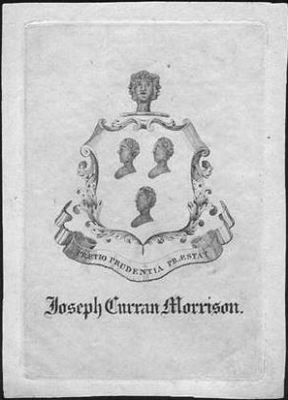 Joseph C. Morrison was born in Ireland and came to Canada in 1832. He was called to the bar of Upper Canada in 1839, and entered into a partnership with William Hume Blake. In 1850 he was elected to the Legislative Assembly for the west riding of York and in 1851 for Niagara. From 1853-54 was solicitorgeneral for Upper Canada and from 1856-57, receiver general. He was back as solicitor-general from 1860-62. In 1862 he was elected a puisne judge of the Court of Common Pleas, promoted to the Queen’s Bench in 1863, and in 1877 was transferred to the Court of Appeal. (Wallace). This bookplate and the Murdoch Morison plate are almost identical.