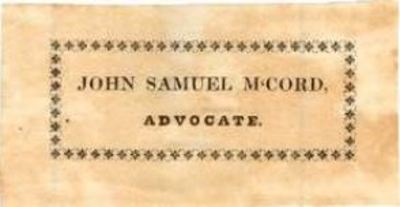 John S. McCord was born in Dublin. He studied law and was admitted to the bar of Lower Canada in 1823. He was appointed a Circuit Court judge for the District of Montreal in 1844 and a judge of the Superior Court, District of Montreal in 1857. He was also an amateur scientist and his name is found on a publication titled, Report of meteorological observations made on the Island of St. Helen, in the river St. Lawrence, opposite the city of Montreal, province of Canada ... for the Natural History Society of Montreal / by the military guard there stationed, under the superintendence and direction of John S. M'Cord, Montreal, 1842. His son, David Ross McCord, founded the McCord Museum in Montreal. This label likely dates to the 1830s. It's strange that it was unknown to Gagnon, H. & A., and Masson, or Stacey.