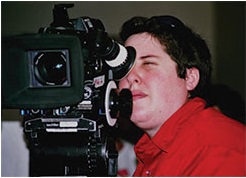 Kami Chisholm is a filmmaker, community educator, and activist who holds a PhD in History of Consciousness and Feminist Studies from the University of California, Santa Cruz. Chisholm has made more than a dozen films that have screened at festivals, universities, and events worldwide, including "The Well" (Indiepix, 2015), "The Insomniacs" (distributed by Wolfe Video and MTV/Logo, 2008) and FtF:Female to Femme (Frameline Distribution, 2006). Her current work eschews disciplinary and disciplining divisions between written/visual, art/academics, history/fiction, analysis/storytelling and revels in assemblage critique of topics such as border imperialism, homonationalism, settler colonialism, consumer capitalism, mental illness, and sexual violence. She is currently finishing an MFA in Film Production at York University.