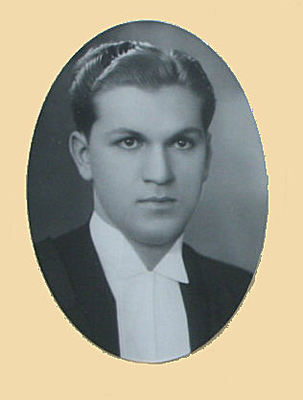 Bora Laskin was the first academic and the first Jewish man to be appointed to the Supreme Court of Canada (1970) and to become Chief Justice (1973). Born in 1912 in Fort William, Ontario (now Thunder Bay) to a Russian immigrant family, Laskin grew up playing baseball and excelling in school. He graduated from Osgoode in 1936 after studying law at the University of Toronto. He went on to complete a Master of Laws degree at Harvard University. Despite his academic credentials, Laskin faced considerable difficulties in finding an articling position, employment or a place in the academy in the anti-Semitic atmosphere of 1930s and 40s Toronto. Laskin persevered and obtained a teaching position at the University of Toronto in 1940. Five years later, he was appointed to Osgoode’s faculty. In 1949, Laskin resigned in order to return to the University of Toronto as a founding member of the new faculty of law. Laskin was appointed to the Ontario Court of Appeal in 1965 and in 1970, was elevated to the Supreme Court of Canada and became its first Jewish member. He is remembered for the doors he helped open for Jewish Canadians, his love of learning, his compassion and his commitment to reason and integrity.