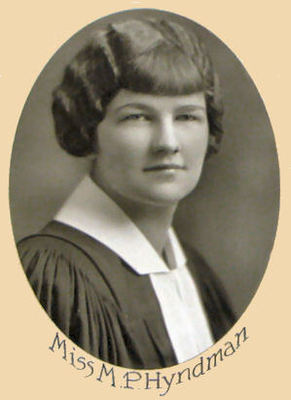 Upon Margaret Hyndman’s call to the bar, the guest of honor remarked that he regretted that her parents had spent so much money to educate her for a profession in which there was no room for women. Undeterred, Hyndman went on to establish a successful career in company law and litigation. In 1945, she became the first woman director of a Canadian trust company. She was also the first Canadian woman to appear before the Privy Council in London. During WWII, Hyndman organized the voluntary registration of Canadian women for war work and pushed to provide free legal aid to members of the Armed Forces and their families. For her services to the Free France Movement she was awarded a citation from Charles DeGaulle and received a silver medal from the City of Paris. A passionate advocate of women’s rights, Hyndman served on many legal and women’s organizations, such as the National and International Federation of Business and Professional Women. In her role as president, she helped shape Ontario’s legislation on equal pay for equal work. Hyndman also participated in the Kaufman birth control case, the Lavell case involving native women's loss of status after marrying non-native men, as well as the Bell Canada equal pay case. In recognition of her accomplishments, she was appointed the second female King’s Counsel in 1938, a member of the Order of Canada in 1973, and received the Law Society Medal in 1986.