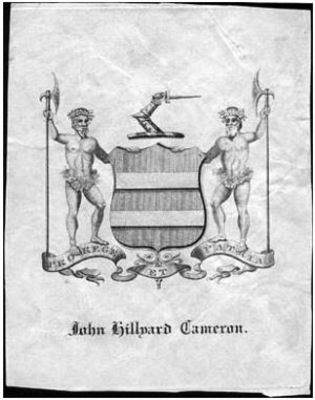 John Hillyard Cameron was born in France and came to Canada in 1825. He studied at Upper Canada College and was called to the bar in 1838. From 1843-46 he was reporter to the court of Queen’s Bench, Upper Canada and began the publication of the Upper Canada Law Reports. He was solicitor general of the province from 1846-48. In 1859 he became grand master of the Orange Order of Ontario and in 1873 he was chairman of the committee to inquire into the Pacific Scandal. He fell under suspicion himself when it was discovered that he had an outstanding “loan” of five thousand dollars from Sir Hugh Allan. (Wallace).