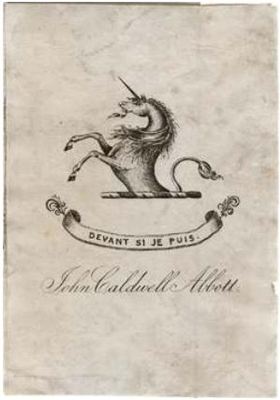 Sir John Joseph Caldwell Abbott Abbott was widely viewed as the most successful lawyer in Canada for many years, as measured by professional income (and when St James Street in Montreal had not yet been surpassed by Toronto’s Bay Street). He began lecturing in commercial and criminal law at McGill in 1853, and in 1855 he became a professor and dean of its Faculty of Law, where Sir Wilfrid Laurier, future prime minister of Canada, was among his students. He continued in this position until 1880. Upon his retirement, McGill named him emeritus professor, and in 1881 appointed him to its Board of Governors. Abbott succeeded Sir John A MacDonald as Prime Minister of Canada on MacDonald’s death in office in 1891, but held the office for only a year due to his ill health. He was our fist Canada-born prime minister. The plate was engraved by Francis Adams, Montreal engraver and lithographer, active from 1853-57. [Motto: Devant si je puis, or Forward if I can].